Title: “The tree of life”

Technique: Oil on Canvas with precious stones (Mother of Pearl, Coral and Jade).

This second oil painting belongs to the Trilogy called “Klimt“, a real homage to the great eclectic Master Gustav Klimt who, through his painting, has always been considered one of the most famous artists of the ‘900.

Attracted by the brilliant combination of painting and goldsmithing, probably transmitted by his master goldsmith, Gustav Klimt represents, for the artist Zancano, a great inspirational source that manifests itself in reinterpretations and reworkings of the technique used.

In the decorative frieze of Palazzo (bulding) Stoclet, the Tree of life is made from abstract-geometric motifs and is a mosaic made up of fifteen panels on a white marble background, it is also lavishly decorated with elements of copper, silver, gold mosaic, hard stone, coral and colored majolica.

In the case of the oil painting inspired by the mosaic of the great Master, only some decorative elements are identified and proposed such as spirals, the bird of prey positioned on a branch, the Egyptian eye, the representations of the plant world, and two-dimensionality. The work created in the period of global pandemic, however, wants to stand out from the Frieze as a hymn to life, so much that the raptor depicted does not identify evil. The common denominator of the Trilogy is characterized by an ornithological figure, which, even in this case, allegorically speaking represent the Company itself. Also the Egyptian Eye has been repeatedly designated in the artist’s paintings, this denotes a great affinity of thought between Klimt and Zancano.

The gems used as mother of pearl, coral and jade are compatible with the thought proposed by Klimt in his mosaic; while the background of the painting is formed by a layer of pure gold leaf and golden pigment  that recalls the color of gold, a metal that is commonly used in goldsmiths. 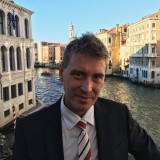