Riccardo Zancano was born in Italy in 1971 of dealer parents.

He became interested in the world of art towards the end of the nineties by drawing jewellery.

In 2000 he followed the first courses in geology and polishing precious stones. In 2002 he moved to Valenza Po in the province of Alessandria (Italy) where in 2003 he obtained the title of “master of art” in the “art of semiprecious stones and gems” at the art institute “B. Cellini”. 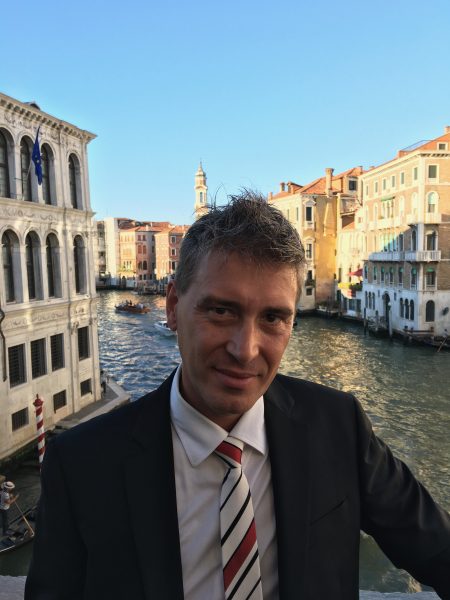 This allowed him to follow some training workshops at the same time where he developed the skills in cutting precious stones (included diamonds), in different goldsmith companies, working indirectly for the most renowned names of Italian jewellery

In 2006 he returned to Trieste and opened a private factory of polishing precious stones. In 2007 he approached painting (hyper-realistic – surrealist current), theater and cinema. In the following years, his interest led him to follow only two passions: cutting precious stones and painting in oils.

In 2012 he got the degree in “pictorial decorations” at the art institute “e. And u. Nordio” in Trieste. In 2014 he attended nude classes at the academy of comics in Trieste, where he improved the technique with charcoal, sanguine and acrylic on cardboard. Since 2015 he has exhibited his works in important collective exhibitions and international competitions obtaining several approvals and results. In 2017 he participated in an abstract painting workshop at the “Scuola del Vedere” in Trieste.

In 2019 he published an autobiography entitled “Riccardo Zancano” edited by Silvia Landi, “GEDI Gruppo Editoriale Espresso”; the volume contains 104 color pages and it is dedicated to a unique contemporary artist who applies precious gems on canvas.

THEMATIC DESCRIPTION OF THE ARTIS’S WORK

The artist Riccardo Zancano has worked as a figurative painter for the last sixteen years trying to describe all aspects of contemporary society in its faults and merits.
The themes analysed, often allegories disguised in ornithological figures, find in oil painting the most suitable means of expression.

The frequent use of pigments makes his works rich and evocative of the great Masters’s technique in metal and gold artistry.
The paintings, conceived as trilogies, contain a common denominator, which, as in a narrative, depicts suggestive allegories on canvas.

Formal values and conceits mark Zancano as a realist, conceptual, hyperchromatic artist, as a well- known art critic, Vittorio Sgarbi, defined him.
The peculiarity of Riccardo Zancano’s original art consists of the frequent application of semi-precious stones and high-quality gems with precise meaningful attributions. Round-shaped stones with cabochon cuts, such as onyx, black spinel, black Tourmaline, even diamonds become eye pupils, while green jade, emerald or green Garnet may turn into leaves and grass and mingle into the colours on the canvas. These are but a few examples of micro sculptures offered in the artist’s work. The insertion of stones implies a lengthy procedure consisting of the first phase of painting, followed by the cutting and adapting of the stones on canvas.

Zancano, attracted by the fascination of nature, beauty, love, and introspection is able to transmit to the observer and to the prospective client his commitment to this deeply felt cliché.